I had grand plans for this month.

I had it all decided that, on one of our family days out, I'd take my 'big' camera and set up a lovely photo of us all.

I had taken a 'selfie' shot of us as a back-up fairly early on in the month.

The back-up has since become this months actual photo!

I honestly don't know where the time goes. The months seem to be hurtling by so fast. We are now in the second week of the school holidays and it's lovely having MC at home. I think TC loves it too - their sister and brother bond is amazing to watch.

The gorgeous weather this month has helped so much. The first week of the holidays was lovely and so hot. Lots of days out and ice cream have been on the menu! Not doing much for my diet but at least we are all having fun.

We've also had some lovely downtime too.

My photo this month shows downtime. It's not the best photo but it's 'us'. We settled down one afternoon to take a break from the midday sun and watch a film. It was 'How To Train Your Dragon'. One we've seen before but we wanted a re-cap before watching the sequel. Does anyone else do that? Matt and MC were engrossed but TC suddenly became transfixed by a fly that buzzed in through the French doors and was circling the centre of the lounge.

As I say, it's not perfect (we're all so hot and tired) but it captures a snapshot of normal family life and that makes me happy. It's these type of photos that you don't often see. So turns out I've become rather happy with my back-up. 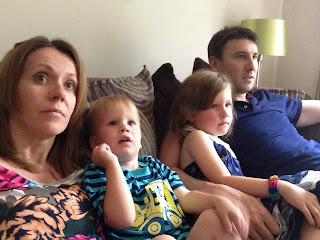 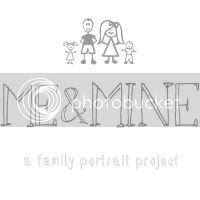 Email ThisBlogThis!Share to TwitterShare to FacebookShare to Pinterest
Labels: #meandmine, a family portrait, being together, brother, chilling out, daughter, downtime, family, family portrait, happy, husband, lounge, love, me and mine, photograph, sister, sister and brother, son, together, wife

I think it's lovely to have a candid Me and Mine photo - it captures the ordinary moments that get forgotten otherwise!

Lovely photo. We do that before we watch a new film if it's a sequel. Good to recap LOL.

This is a lovely post. My friend's daughter will be four when her baby brother arrives. My friend is worried they won't bond due to the age gap and gender difference, so I've sent her this link to cheer her up!

Sometimes it's the normal moments that are the best! #meandmine

I think it's important to capture those everyday ordinary type of moments, as well as the exciting days out. That's life after all. I bet it's so lovely having both kids together all the time again, with the school holidays. I'm starting to dread my little man starting preschool in September, as I think his little sis is going to miss him terribly. x