It's my birthday today.

I remember turning 30 nine years ago (man, I'm good at math!) and I was a little anxious about it.

I know my 30's aren't over but this decade has been the best so far. It doesn't seem like much when I write the list of key events but each event is pretty huge and has brought me so much joy...

It doesn't bother me.

It doesn't bother me at all.

Because I am happy.

Matt is the reason I'm quite happy to be turning 40 next year*.

I'm blessed that I have a great husband, 2 gorgeous and healthy kids, amazing family, extended family and wonderful friends.

I'm determined to enjoy this last year of my 30's because life is too short to worry about numbers.

What are you doing Saturday 2nd November?

I know what we will be doing.

My little family and I will be at the Matilda Mae Welly Walk at Beale Park, Reading.

And we cannot wait!

The day has been planned by Jennie (Edspire) beautifully. She's had so much support and it's so amazing seeing it all coming together.

Please visit Jennie's blog for the full run-down of what to expect at the Welly Walk. Please also make sure you share this with friends, family, work colleagues, neighbours, strangers...anyone.

But how can you not want to be part of this?
(Please see Jennie's blog for all the details of the sponsors and more!)

Tickets are selling out fast and can be purchased from Beebies Baby Store NOW!

Please help spread the word so we can raise as much money as possible for The Lullaby Trust.

If you can't make the walk, please consider a donation to the Matilda Mae Starlight Fund. 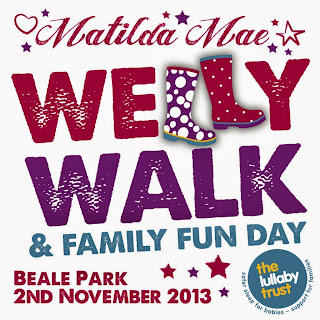 This event is taking place in memory of Matilda Mae who was given her angel wings at the age of just 9 months to the day.

2nd November marks the day she would have been 18 months old.

Two words no-one wants to hear but people need to talk more. Together we need to raise awareness. Break the silence. So many families lives are destroyed each year.

Please help the love and support live on.

The Bugaboo Buffalo And The 'Bug A Boooooo'

As most of you are aware September ending up being a bit rubbish. A bad case of food poisoning wrote off a big chunk of the month.

The bug had hit me bad.

I thought I was recovered. I was back eating normally for about a week and had just finished taking a course of antibiotics. I had my strength back.

Out of nowhere it came back.

The first I knew about it was the early hours of Wednesday 2nd October. My stomach just didn't feel right and pain kept me awake a lot during the night.

The lovely people at Bugaboo had invited me and some other bloggers to a special event in Manchester that day between 3-6pm.

By 4/5am with very little sleep I didn't think I'd make it.

But by 10am I was feeling okay, just mainly tired from lack of sleep so TC and I headed off there in the afternoon.

It was great to meet Alice and Julie. They are genuinely such lovely ladies. The Bugaboo pushchairs and products are amazing and I was totally in love. We were given a demo of the brand new Bugaboo Buffalo which was released in the U.K. in September and every one of us longed for it I think. There were cupcakes and bubbly (although I stuck to water) and it was lovely to see old friends and meet some new ones but I knew I wasn't right. I felt spaced out. I felt tired. I just knew something was going to happen.

We all filled out competition forms for the chance to win a brand new Bugaboo Buffalo. I almost didn't fill mine out as I never win competitions. As much as I wanted the Buffalo I didn't think I stood a chance of actually winning it.

TC had a whale of a time though. He loved pushing the Bugaboo Buffalo through the showroom and he got to eat some cake too. So it was no wonder that he screamed when I put him back in his pushchair to come home.

"I think he's not happy it's not a Bugaboo" I joked.

I left early and after an exhausting 2 hour drive (it normally takes about 50 minutes!) I arrived back home and collapsed.

3 or so hours later I started to feel unwell again so I took to my bed.

By 1am the searing pain in my abdomen woke me up.

I spent the rest of the night on the sofa writhing around in pain. I didn't know what to do. I felt like I just wanted to rip out my insides. I quietly wept.

When Matt came downstairs at 7am he went mad telling me how I should've woken him. I didn't want to though as I knew one of us would need to function the next day and he's dreadful if he misses a little bit of sleep. I think it's a man thing.

He rang the doctor at 8am.

By 11.30am we'd been told to pack a bag and get to hospital to check it wasn't anything more sinister.

A drip of fluids and painkillers for the afternoon and I was sent home later that evening with some strong co-codamol to manage the pain. They, through blood tests had ruled out an inflamed appendix and diverticulosis thankfully.

Although the pain had lessened it still kept me awake.

I was out of it on painkillers and slept on and off most of the morning. There was a missed call on my mobile about 10am. No message.

I didn't ring it back.

"Ignore it" said Matt "You're not well".

It was Alice from Bugaboo.

I had only gone and won the Bugaboo Buffalo!

There may have been a few tears in my eyes when I heard her tell me. I never really win anything and to win after the up and down few weeks I'd had was amazing.

I am absolutely thrilled and we can't wait to get it. They are in huge demand at the moment so we have to wait a few weeks but just knowing that it will be ours is fabulous! I will let you know what we think when we test drive it for the first time.

As for the 'bug'.... Well, about 2 hours or so after Alice rang me I ended up back at hospital on another drip as the pain came back worse than ever but thoughts of the Bugaboo got me through ;-) *


* I'm actually feeling much better and at the time of posting this I've been painkiller free for over 38 hours and today I'm going to try eating some normal food. Thank you to all of you who sent well wishes. I will catch up on your comments and blogs this week, I promise.