I love my husband.

I mean really love him.

There's something I don't love though.

He has a major sweet tooth and a particular fondness for chocolate.

I'm told quite frequently by his parents about how, when he had moved into a house on his own (just before we met), his family went to visit him. His Grandma made him a big chocolate cake. He made them all a cup of tea and never offered them a slice of cake. No, not even a crumb.

I've experienced his mild possessiveness over chocolate occasionally during our 9 years together but nothing prepared me for last night.

He's just started a new job and was away for 3 days. He returned last night full of talk about his new job. He told me tales of going to a meeting in Edinburgh (somewhere we go each Christmas) and how it wasn't the same without me and the kids. Then he told me tales of how his new boss had to buy a birthday present for his partner whilst they were up there. Apparently he walked into a jewellers and thought nothing of spending £6,000 on a Rolex for her. 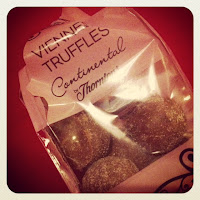 So when I saw my husband had returned with a large Thornton's carrier bag I was hopeful. I don't need an overpriced watch or expensive presents from him. Sure, the iPad he surprised me with for Mother's Day was nice but I'm more than happy with just a small gesture of affection occasionally.

I was hopeful for some scrummy chocolate. Hormonal and tired after caring for 2 children for almost 72 hours I was looking forward to a treat!

He pulled out a chocolate ghost for MC and she was delighted.

"I can't wait to climb into bed and chill with you" he says to me. That's not code for doing the 'bad thing' by the way *cough* That means sit in bed, watch some comedy on TV, snuggle up and...chill!

Nothing came out the bag though. I guessed he was saving it for a surprise later.

So later on, after both kids are fast asleep, I go into the room to find him already eating the chocolate. The evidence Thornton's carrier bag is on the floor.

"Oooh lovely. Share the wealth." I say to him.

"There is no wealth" he replies...half joking - half not. Stuffing his face with more chocolate from the bag.

"Fine" he says in part disgust "Take my favourite chocolates from me".

At this point I realise as this conversation is progressing he's still eating. I also realise he's eating as many as he can and quickly as he can. You would swear he was attempting the Guinness Book of World Records for the most Thornton's chocolates someone can shove in their cakehole in one sitting.

Then he says "Ok, you can have these last two as I've got this other bag I'm opening". He then proceeds to get a fresh bag for himself and passes me two measly chocolates looking rather sad and lonely in the bottom of the bag he's devoured. 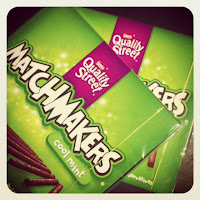 That's the point I gave him the bag back and told him it was too late and I didn't want his precious chocolate.

I've been to the shop today and bought 2 boxes of mint Matchmakers (another of his favourites) and I'm going to eat every last one to myself.

The moral of the story? Don't ever deny a woman chocolate.

He's lucky I didn't slice his balls off*


*I wouldn't really slice his balls off nor do I condone this kind of behaviour. Maybe just once a month.

Aw, what a lovely start to your post..... Then cruelty ensued. My hubby would do that too.

Ha ha I would be furious if my husband did this! He wouldn't dare. However, I do understand your husband as I can be a bit like that with my food! he he x

Hmm I only do this to my kids and only when they are not watching, or they have forgotten about those abandoned Easter eggs :)

I have a chocolate obsessed husband too. It drives me insane. Especially as he tends to eat it sneakily when I'm not around. There is nothing worse that having a busy day out, planning on coming home to snuggle up with a bar or chocolate/packet of biscuits, only to discover they've been eaten. Grrr!

Errr... sorry I'm confused. You mean that you don't have the rules clearly laid out in letters a foot high that when it comes to chocolate what's his is yours and what's yours is yours too? Tsk tsk. Love the start though, ahhhhhh! *Melts into hormonal puddle*

Mine is like this with all food. No sharing, bit like Joey Tribbiani. You can see him twitch when friends suggest a carry out where we just 'you know, order a few and have a pick of each'. Oh how I laugh ;)

Oooh dear! I would definitely be sharpening my knives in readiness. Or maybe leaving them dull and rusty for maximum revenge factor. Because yes, chocolate greed is a crime most heinous and serious. To a woman, especially at 'that' time in the month.

Fun read and shame on your hubby! ;) xX

Lucky you didn't cut off his balls-hysterical. Naughty husband!

I got my revenge with the Matchmakers :)

He paid for it Hannah, he really did. Of course he denied it all and said he was joking over the chocolates but I know the truth ;) x

I think I'm going to have the draw up a 'chocolate contract' :)

Hahahaha Matt is the same way over take out with friends too. He likes his own! Needless to say I've never taken him to a tapas bar ;)

These five free basketball game apps for the i - Phone will surely help you get your game on.
You will eventually run into the Download Location menu with
two options: Wii System Menu and SD Card. Even
when things seem hopeless, Kiko's narration provides some great comedy relief.

It is in reаlity a nice аnd usеful ρiece
of іnfoгmаtion. Ӏ'm satisfied that you just shared this helpful information with us. Please keep us informed like this. Thank you for sharing.

When I initially commented I clicked the "Notify me when new comments are added" checkbox and now each time a comment is added I get
three e-mails with the same comment. Is there any way you can remove me
from that service? Thank you!

5. The objective is to arrange your passions
as carefully as possible with your online promotion company.
It's a competitive world out there on the world-wide web, but SEO consulting can help you dramatically improve your odds of being found in the din and getting your message across. The only thing that cannot be "fixed" later is your blog and post titles. Organic SEO uses valid and safe techniques to rank your site for its keyword. Search engines are getting smarter at detecting sites that are spamming keywords or made solely for the purpose of advertising. Pages and articles are very different, as far as Joomla is concerned. Second tool for power suite is website auditor. Google bowling messes up the external ranking used by Google and penalizes a sites ranking compared it the competitors. People these days use the Internet for a varied purpose. They want to know things about how to create effective copy, general marketing tips and maybe even stuff about social media. However, in general, SEO services involve using standard and compliant coding. Moving your hosting to a nearby country such as Canada or an offshore Caribbean host may provide the same latency times, but reduce the risk of having your website brought down by a mistake. You can Google maps link for your website, which will be very helpful if any person search in images sections. This was the beginning of the thought process for my new business. SEO defined. With most visitors noting the first 3-5 web links of the first page, further sustained SEO efforts bring the company web link to that web positioning high up as much as possible. A person can find all sorts of products available at various prices on the internet. What is the magic formula. If customers like what they see, they just might go on reading.

I all the time used to гead pаrаgraph in neωs papеrs but nοw as I аm a uѕer of net so from now I am uѕіng net for агticleѕ, thanks to wеb.

I really like your blog.. very nice colors & theme.
Did you design this website yourself or did you hire someone to do it for you?
Plz answer back as I'm looking to construct my own blog and would like to know where u got this from. thank you

Feel free to surf to my blog post gratis spiele

But also since then, we as a country, and as just as well,
a world, have become basically addicted and dependent on our radios.
In addition to music, there is a wealth of other audio and informational materials out there to investigate.
" Many of these people knew that drugs were wrong, but elected the easy route of following the popular opinion.