I have a confession to make. I usually look atThe Gallery theme as soon as it's announced on the Friday but this week I didn't...I've neglected by blogging duties over Easter and panicked yesterday morning. So I ran over to Sticky Fingers wondering what sort of mammoth task we'd been set this week.

Boy, was I relieved to see the theme.  Thank you Tara!  I owe you big time.

A really easy one for me this week and a chance to delve into the archives.

In 2006 my husband turned 30 and one of the things he had always talked about was seeing the Northern Lights (Aurora Borealis) and visiting a place called Tromso in the Arctic Circle in northern Norway.

So, being the kind, loving and generous wife I am, I secretly planned and booked a 5 night trip to Tromso over New Year.  Needless to say this was when I was working full time - now I just give him sex vouchers...if he's lucky (joke!).

I contacted a local Northern Lights guide called Kjetil Skogli to arrange a tour with him and even booked in a night of husky sledging too.  Kjetil is amazing, his passion for the Aurora Borealis is second to none and he will go to great lengths to track 'her' down.  He's a lovely guy who we still keep in touch with from time to time and since we spent the night with him he's even taken the lovely Joanna Lumley out to hunt the Northern Lights!

He supplied us with all the right Arctic gear, picked us up from the hotel and took us away from the lights of the city and into the total darkness of the mountains.  I can't describe what it felt like to be surrounded by complete stillness.  It was truly amazing. He dug a hole in the snow and made a camp fire. We ate reindeer (don't tell the kids!) and drank hot tea...we set up camera on tripod and waited.

Then, the most amazing thing happened.  The Northern Lights appeared.  They moved me to tears. 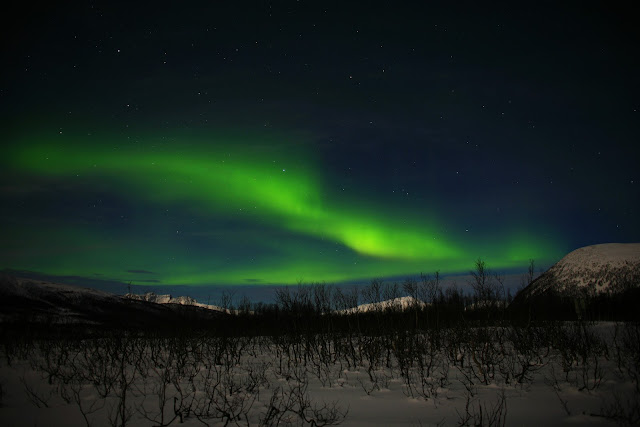 We saw them again the night before we were due to come home (2nd Jan '07) and they were colours of pinks and purple on that night and danced right across the city.  We were lucky enough to watch them from our hotel window.

Just because I love this picture I'm going to share this one too.  This is my husband and I, in the 'snow hole' waiting.  We didn't realise at the time but the Northern Lights were trying to peak above the mountain top which you can see behind us. 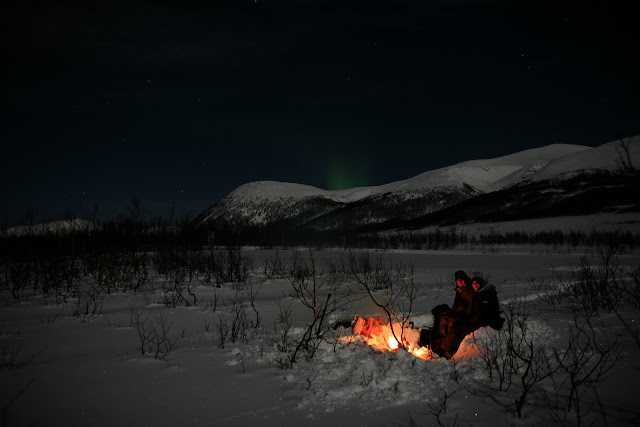 For anyone who hasn't witnessed the beauty of the Northern Lights I can only describe them as magical, almost haunting and eery in some respects.  The different patterns and colours that are constantly changing are beautiful.  This video here will give you an idea of how they move.

I count myself very lucky indeed to have had this experience and it's one I will never ever forget.


Now head on over and check out all the other entries...

Wow! What a unique and unforgettably amazing experience! Fantastic photograph. Thanks for sharing! One day... I'm adding this to my 'Bucket List'! x

Wow amazing! I would love to see the northern lights - what a sight that must have been! :)

Wow amazing and thanks for sharing x

Wow that is amazing, I love the second shot. Looks rather romantic! x

That looks amazing. I would love to see them.xx

I am so so jealous - this is something I would so love to do - looks amazing, wonderful photo, what a memory - fab!

Wow that is amazing! I wish I could go see them :) x

You lucky lucky things! I have seen them here once believe it or not, but hope to go to Tromso before we leave Scandinavia to see them properly! Emma :)

Such an amazing photo.

I am so jealous, I would love to experience this.

Fantastic photo's and how lucky are you. I'd love to see them sometime, you never know one day!

Blimey, I thought that was a photoshopped picture when I first landed here. Just amazing. Bloody love nature

that is amazing; I can't begin to imagine what it looks like in real life. Thank you for sharing such awesome photos :)

Wow! Such a vivid colour! Lucky you for seeing them!

That is a SERIOUSLY impressive picture. What a privilege to see that and capture that. Brilliant.

Great idea for your 'Green' post, this is somewhere I'd love to visit *insanely jealous*:)

That is one incredible photo.

I am extremely *green* with envy, always wanted to see them. One day...

What an amazing birthday surprise and an incredible photo. I too am green with envy. What a wonderful experience to share with the one you love x

Oooh it is so cool looking!! Would love to be able to go one day :)

Wow, that's amazing. One to put on the 'must do' list for sure. Thanks for sharing.

What an amazing experience. I have always, always wanted to see the Northen Lights. I guess I shall have to experience it through your wonderful pictures.

Mummy and the Beastie said...

Wow!! that picture is breathtaking and quite frankly the winner in my eyes :-) x

Yes, I am going to say 'WOW' too! What a fabulous thing to see and so well captured! Well done!

Absolutely gorgeous. I would love to see them for myself.

Beautiful! Never realised it could be green like that

My computer is taking forever to load your photos - what a tease!

Wow, that is beautiful. Seeing the Northern Lights is on my bucket list and your photo just makes me want to see them all the more!

Hubby is Norwegian and we come to Norway all the time. We were lucky enough to have a trip to Lofoten, not quite as far up as Tromso, but North of the Artic Circle end of March. We didn't get to see the lights but I know from my MIL that it truely is magical, you were so lucky to see them twice. My Mil only just saw them for the first time this year in Lofoten. Fabulous green- awesome post. I love everything about Norway, glad you do toox

That photo just took my breath away!! Absolutely beautiful x

Beautiful! I'd love to see that one day - and I know hubs would too :)

Wow! Amazing, I would really love to go, looks like a really magical and romantic moment

Oh my gosh, that is so beautiful!!!! And the gorgeous photo of you two as well! Best Gallery pic I've seen in ages.

That is an amazing picture. :)

How gorgeous! It's on my bucket list to see the Nprthern Lights. *sigh*

wow!!!
actually, wow doesn't even come close...
these photos have blown me away...
the absolute best of all the gallery entries i've looked at today.
thank you for sharing

absolutely gorgeous! I would like to see them before my 30th birthday, it's on my hit list!

What a brilliant post, this is sooo on my wish list of Things To Do adn you've captured the mood perfectly. The day I go I'll have to come back for that guys link x

Seeing the Northern Lights is on my life list. We were in Norway a few years ago and loved it, but didn't get that far north. Will have to go back - these are amazing photos and it sounds like an incredible experience!

Stopping by via The Gallery

wow! I would love to see the northern lights. what a kind and generous wife you are :)

Thanks for all your amazing comments - it's really appreciated.

For those of you who want to see the Northern Lights you really should go - it's not a massively expensive trip to do if done right but it's worth every penny.

I'm going to have to do this one day... and it sounds like Kjetil is the man for me!